Whoever approaches the art of Peter Vogel must be prepared for a reaction. His objects sound and shine.
They knock and beat. They invite playing a game that “activates the best energies of man, stimulates his phantasy, mobilizes his strength” (Vogel). His sound and light objects themselves are dependent on their dialogue with the exterior world: composed of wire, resistors, transistors, capacitors, relays, motors, magnets, lamps, loudspeakers, and photocells, they react to shadow and sound. Even though they are fascinating as objects due to their multifarious, filigree design, their form generally follows their function, which is determined by their individual, unique potential to react. Without interaction they are lifeless and mute. This interrelation between reception and production is central to the work of Peter Vogel. The conversion of the object status into an aesthetic of process is based on the philosophy that being is a constant fulfillment in the diversity of becoming.

Becoming and process have always played a dominant role in artistic creation. Influenced by Tachisme and Action painting, Peter Vogel’s own paintings of the early 1960s focused on the visualization of dance, music, and corporeal experience. He perceived his paintings as “movement scores.” At the same time, he experimented with feedback and the superimposition of sounds using his self-made tape recorder. But time is not only metaphor and material, but also a constitutive factor in Peter Vogel’s oeuvre as a whole. His professional work as a physicist, which he pursued parallel to his artistic work in his early years, certainly played an important role in this.
In his scientific experiments on the boundary between medicine and technology, he was deeply fascinated with brain science and cybernetics. It was such scientific experiments that inspired his first reactive objects—whirling tubes, inflating rubber gloves, flashing lamps—objects that he integrated into his abstract paintings as reactive elements until 1970. Although process aesthetics were already a focus, chance was not yet understood as a constitutive element. For the artist and scientist, who was at that time still attached to a deterministic physical worldview, chance was simply the subjective description of a causal process that was not yet understood.

The essential breakthrough that made Peter Vogel one of the pioneers of interactive art was associated with a paradigm shift: the abandonment of painting and the exploration of technology. With his Machina Speculatrix
of 1969, he created his first rudimentary open system, inspired by an experiment by the neurophysiologist William Grey Walter: a small moving engine equipped with sensors that reacted to stimuli in its surroundings.
It was able to scan a small area, and could move within this limited field and avoid crashing by taking evasive action. As a follow-up, he created “cybernetic objects,” artificial one-celled organisms, electronic imitations of behavioral patterns of known or imagined systems. Each object has a predefined set of behaviors, an elementary form of memory, and an individual character. Thus, the object Bedürfnis (Need) of 1973 strives to suspend a state of deficiency, a process called “negative habituation” in psychology. This object was triggered to produce sound when a shadow passed its photocell; and while in a state of “food deprivation,” it began to react to noises in its surroundings as a counter-strategy.

As of that time, Vogel created open, information processing systems, which are influenced by a trigger (stimulus, input) and transition from one state to another. Adaptation, coincidence, the aleatoric, feedback—these are the reactions that determine the character of the work. The sensors act as specialized cells that register the stimuli from the surroundings and convert them into a neuronally comparable form. While, in the feedback, part of the output is input back into the system, adaptation results in attunement to external circumstances, and to a change in the behavior of the objects. In this sense, Peter Vogel’s art is autopoiesis—a process of self-creation and
self-preservation.

The multiplicity of emergence, the complexity of life, the unpredictability of events—these concepts involve chance as a creative principle. But chance is not the same thing as coincidence. It is thus the various manifestations of chance that are interesting here in the work of Peter Vogel.
Already in 1970, he created the work Aleatorisches Triplett. Once the rotating metal strips had been set in motion by an observer, the mechanical object started stimulating itself and was able to behave in an unpredictable way due to the dynamics inherent in the feedback. Although chance played an early role in Peter Vogel’s oeuvre,
he first addressed this design principle in his work Zufall oder Notwendigkeit (Chance or Necessity) of 1989.
The reaction structure of this object is strictly deterministic, but all sound reactions are nevertheless perceived as random. Aleatorische Plastik (fig. 1) of 1992 functions in a similar way. Pitches, rhythms, tempos, and timbres change for the actor in a dialogue that is unable to be foreseen. The reactions are as changeable as they are topical, ranging from calm to nervous, melancholic to funny, loud to soft, tonal to atonal. An additional variation is Selection (fig. 2) of 2014. Here, each stimulus triggers a short repetitive sequence, while further stimuli influence the pitch and rhythm.
In the work Verlorene Melodien (fig. 3) of 2015, each one of the nine xylophone elements has a clapper.
The stimulation of one or both sensors triggers a sequence of tones that varies with each new shadow stimulus. Although the possibilities of variation are finite, they are extremely numerous—there are millions of them. Since the possibilities to re-create the same sound image are extremely unlikely, each sound image is perceived as unrepeatable, as irretrievably gone.

In connection with objects with this mechanism of action, the artist spoke of “deterministic coincidence” (fig. 4):
the reactions are unforeseeable because an automatic variation is triggered inside the system. And the same impulse can thus result in different reactions, trigger different patterns. However, the inner state of the system remains concealed from us, since it is not possible for us to know all the parameters (fig. 5). The most insignificant changes in the initial situation—which cannot be influenced by the observer—have a decisive influence on the result. Chaos theory refers to this as deterministically chaotic systems.

In Peter Vogel’s work, “genuine chance” can only be spoken of when mechanical elements are integrated to produce chaotic movements, as, for example, the clappers in his installation Kellerorchester of 1989. A further example of such mechanically generated aleatoric sequences is Zither of 1997 (fig. 6). When a shadow falls on the photocell, the three rotating mallets strike the string of the instrument, and, depending on the impulse, at times also simultaneously.
Hurling the balls around thus leads to the generation of rapid, random tone sequences. Since the Zither becomes out of tune over the course of time, the resulting sound is constantly changing and, for this reason, is unpredictable in a twofold sense. In the work Kugel-Percussion (fig. 7) of 2005, a table tennis ball is triggered to bounce on a horizontally installed loudspeaker that emits low-frequency vibrations. The frequency can be altered via stimuli. Although the movement of the membrane remains the same, the bouncing of the ball is completely chaotic; when it hits the membrane, a percussive sound with a random rhythm is generated.

The work Vibrations of 2008 is based on a chain reaction (fig. 8). The object consists of a magnet in the form of
a sphere, around which metal rods are arranged spherically. When the sphere is triggered to rotate by a shadow being cast on the photocell, it generates a magnetic field. The duration of the shadow influences the speed of rotation. With fast rotation the wires are set into chaotic oscillations until they touch each other—giving rise to
a metallic sound.

In the case of objects such as Zwei ineinander versteckte Tonfolgen (Two sound sequences concealed inside each other) (fig. 9) of 1982, for instance, chance always arises when predetermined independent systems interact with one another and repeating sequences of impulses with different durations overlap (fig. 10)—a confluence that generally generates chance. Chance is likewise a theme in the object Hommage à Ligetti of 2009 (fig. ##). Here, six clicks with different pulse frequencies overlap. Although each of them ticks with a strictly predetermined pulse, because the clicks are independent of each other, the overlapping results in an almost infinite number of random patterns.

Generally speaking, chance can be observed in the work of Peter Vogel as evidence of the fact that a resulting actual final situation is not necessarily based on a specific action in the initial situation. The unpredictability of the result is part of the basic dynamics of the game. If the initial situation is identical, completely differing end situations can nevertheless arise: a short stimulation can make a tone swell by changing its rhythmic structure or pitch. A long-lasting stimulation can initiate processes or turn them into their opposite. When trying to understand the mechanisms, to see through the effects of one’s actions by means of repetition and variation, the actor/player is in dialogue with the object, left wavering between empirical observation and free-floating imagination. Nonetheless, his/her behavior affects the object and its reaction: a slow approach has a different effect than a fast movement. Calmness, irritability, shyness, or curiosity lead to an immediate response. The objects react to the outside world and thereby live a life of their own. They are open works of art. The artist creates the potential—a potential that is realized in a new and always different way. 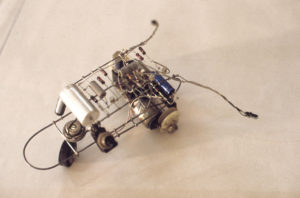 The brain reaches to the fingertips

The art of chance

On Process Aesthetics in the Work of Peter Vogel 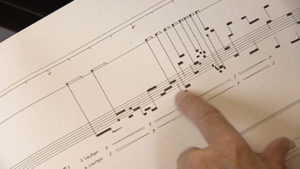 The sound sculptures of Peter Vogel
by Eckhard John