1937 Peter Vogel was born as son of the painter Alfred Vogel and the sculptress Erna Vogel. After his father died in 1945 following a war injury and only one year later, in 1946, his mother died after giving birth to a daughter,
the nine year old boy grew up with his grandparents in Freiburg.

1948-57 The early encounters with the artistic activities of his parents, the piano lessons by his aunt, whom he accompanied to radio recordings in the studios of Südwestfunk, awakened very early Peter Vogel’s creative potential in many fields. Still an adolescent he became intensely engaged in painting and music; he took dance courses and worked as an extra at the Theater of Freiburg. After building his own tape recorder in order to record and manipulate music pieces, he gained first experiences with electronics and sound.

1957-59 high-school graduation and beginning of his studies in physics at the University of Freiburg; various internships in a factory for electric motors, at ZUSE computer factory in Bad Hersfeld, and at the radio station Südwestfunk Baden-Baden; construction of a new tape recorder, further elaboration of recording electronics and sound manipulation; experiments with musique concrète.

1960-64 intensive preoccupation with theatre-, light- and sound technology, organ construction, and above all with the representation of time structure in painting, final diploma in physics at the University of Freiburg.

1965 marriage with Ursula Becker, start of his professional career as a physicist in the development of medical apparatus, profound preoccupation with choreography, development of choreographic notations and of a simple dance script, strong interest in neurophysiology and psychology.

1966-1970 training in film recordings and editing, sound editing, synchronisation and sound engineering in the course of a part time job at Filmstudio Krafft in Freiburg; creative cooperation with the Argentinian composer Daniel Basi, music and sound experimentation in an experimental music group, among others with Klaus Theweleit and Peter Schleuning; birth of his daughter Susanne on September 4th, 1968.

1969/70 renewed construction of a tape recorder; collaboration with a project for the technical development of an electronic organ for contemporary organ music literature, composition of stage music, first experiments with cybernetic images inspired by Daniel Basi; replication of a “machina speculatrix” following the model of neurophysiologist Grey Walter; start of his employment contract as a physicist with Hoffmann-La Roche: development of brain electrodes for the neurological measurement of the precise instant of death in humans; preoccupation with neurophysiological processes and construction of his first cybernetic objects; birth of his son Achim on April 19th, 1970.

1971 first exhibition of his art works at Galerie Gräber in Freiburg; the music-electronics studio in the basement of his house is transformed into a workshop for cybernetic objects .

1972 exhibitions at Galerie HILT in Basel and at ART Basel, various galleries are showing strong interest in his sound objects.

1973-74 exhibitions among others in Freiburg, Berlin, Stresa (Italy), at ART Basel, in Düsseldorf and in Paris.

1975 termination of his work contract with Hoffmann-La Roche and stronger devotion for his freelance artistic activities; composition contract for Donaueschingen Festival: participation with his work Musikalisch-kybernetisches Environment; development of a reaction score in which sound reactions are notated depending on possible stimulations (shadow casting) by the observer.

1977 participation in the Music Biennial Zagreb with his Musikalisch-kybernetisches Environment,
dance workshop and performance with the improvisation group KASP.

1978 renewed participation in ART Basel evokes strong interest on the side of several galleries; creation of the first Klangwand (sound wall) with horizontal arrangement of several sensors.

1979 participation in the ARS ELECTRONICA in Linz (Austria) with a sound wall; construction of the huge sound tower Ariels Tonzauber (today at Ludwig-Forum Aachen); first exhibition at ARRAS Gallery in New York as well as in further US-american cities; three-month stay in the USA and completion of several objects which he had already started preparing in Freiburg; relocation of the small basement-studio in his house at Birkenweg, Freiburg,
to a larger atelier with tall windows looking north and a large storage room in Langemarckstraße 67, Freiburg.

1980-82 Klangwand dance improvisations of Christine Brodbeck at Art Ensemble Basel and at ART Basel
(with Galerie Beyeler); performance with the Klangwand in Tanzfabrik Kreuzberg (Berlin); art-in-architecture project in the lobby of the City Hall of Essen, several Klangwand performances in New York.

1983 montages of minimal music with Ensemble Modern at the first Zeltmusikfestival in Freiburg.

1984 many montages of minimal music, and practice of the interaction with multiple echoes with sound-tape delay; preparation for concerts with synthesizer and piano.

1983-86 musical experiments with tape delay; live concert of minimal music in Zürich at Koprod, at Kunsthaus and at minimal music-Festival in the Rote Fabrik; further concerts at Galerie Baumgarten in Freiburg, at Galerie Corinne Hummel (with Christine Brodbeck) and at Kunsthalle Basel.

1987-88 experimental playing with minimal music has led to the construction of minimal music-objects; for the performance of their cabaret piece “Das Geheimnis der Aktentasche” at the TAT Frankfurt, comedians Heinrich Paschl and Matthias Beltz used an apparatus constructed by Peter Vogel, in which two levers protruding from a wooden case can be operated to record speech and reproduce it when required.

1989 The works Kellerorchester and Minimal Music-Klangwand are displayed at Kunstverein Gianozzo in Berlin. The Akademie der Künste Berlin presents the Schattenorchester I, which has emerged from the Kellerorchester, where the instruments appeared as shadows on the wall.

1990 The Schattenorchester I is exhibited at Hack-Museum Ludwigshafen, in the Theater im Marienbad (Freiburg) in the form of a music performance, and in the Museum for Contemporary Art Freiburg. Peter Vogel’s first journey to Tokyo at the invitation of Toshiba Corporation where he presents the work Japanischer Turm at the occasion of the opening of its new exhibition halls in Tama City. Vogel experiments with poly-rhythmical minimal music,
in which rapid phase-shifting occurs by overlaying of repetitive figures of different metres.

1991 journey to Nagoya at the invitation of the ARTEC Biennial, where Peter Vogel presents the sound wall Sounds of Shadow (now Nagoya Klangwand); inspiring encounters with many colleagues from the sound art scene.

1992 invitation with Sounds of Shadow to Taichung (Taiwan Museum of Art) and Taipei (National Institute of the Arts); Vogel begins exploring experimental video, video feedback and dance video; poly-rhythmical minimal music concert (with the poly-rhythmical pendulum) in Kunsthalle Basel; the reaction of some of the audience is so uncomprehending that as a consequence Peter Vogel decides to stop giving concerts for the time being.

1993 construction of the Schattenorchester II, participation in the festival Interface Hamburg (New Media) with the Minimal Music-Klangwand; Schattenorchester I is exhibited in the exhibition “Schattenprojektionen” in Oberhausen, organized by Werner Nekes; Schattenorchester II premieres with a music performance at the Theater im Marienbad in Freiburg, where Peter Vogel also shows his video feedback films for the first time

1994 Schattenorchester II is exhibited at the Donaueschingen Festival and in the Landesmuseum Mainz.
At the art fair FIAC in Paris all works exhibited at Vogel’s Italian gallery Valente are sold.

1996 teaching position at the Hochschule für Bildende Künste in Saarbrücken; exhibition of the Techno-Klangwand at the sound art festival Sonambiente of the Akademie der Künste in Berlin, with a dance performance by Bridge Markland;  Peter Vogel travels to Japan with an exhibition in the ATRIUM in Fukuoka; the Nagoya-Klangwand is shown at the Cirque de l’Hiver in Paris and at the Bremer Tanzherbst.

1997 retrospectives of Peter Vogel’s works in the Skulpturenmuseum im Glaskasten Marl, the Landesmuseum Mainz, in the Elisabeth-Schneider-Foundation for Contemporary Art in Freiburg and at Galerie Hoffmann in Friedberg.

2002 Vogel travels to Montevideo and gives a workshop for building sound objects in the local Goethe Institut; participation in the Sound Art Festival Barcelona; journey to Tokyo in the context of an exhibition at Gallery TOM.

2005-06 journey to New York for an exhibition and performance at bitforms gallery; journey to South Korea for an exhibition at bitforms gallery Seoul; exhibition of the Klangwand at Daelim Museum in Seoul; performance with the Schattenorchester III in the E-Werk Freiburg, honorary winner of the German Sound Art Award, given by the Skulpturenmuseum Glaskasten in Marl and WDR 3 (radio station Westdeutscher Rundfunk 3).

2007 concert with Guillaume Chastel and Felix Borel in the E-Werk in Freiburg; exhibition and concert with
Rei Nakamura in the frame of Tastentage in Leipheim; grand retrospective of the works of Peter Vogel at the Museum for Contemporary Art Freiburg.

2008 performance with various percussion objects at the Drum Festival in Lugano; exhibition at Espace Multimédia Gantner in Bourogne near Belfort (France) with a dance performance in front of the sound wall.

2009 Peter Vogel travels to Kairo, for the first time to a Muslim country, and he is fascinated.

2011 exhibition and concert with Rei Nakamura at Museum of Art Heidenheim; exhibition at the University of Brighton, organized by Jean Martin; since Peter Vogel is ill, his son Achim Muranyi takes care of the set-up and gives a performance with Schattenorchester III and the Klangwand.

2012 journey to Norway, where Schattenorchester III, the Techno-Klangwand and several smaller sound objects are presented at Lydgalleriet in Bergen.

2013 participation in the “Urban Sounds”-Festival at the Museum for Electronic Art in Basel.

2015 Peter Vogel is awarded the KUBUS Sparda-Art-Prize with exhibition at the Museum of Art Stuttgart including Schattenorchester III, Techno-Klangwand, and many smaller sound objects, drawings and diagrams.

2016 construction of the Aleatoric Orchestra, a large sound installation with analogue instruments.

On 8th of may 2017 Peter Vogel passes away in Freiburg after a long illness. 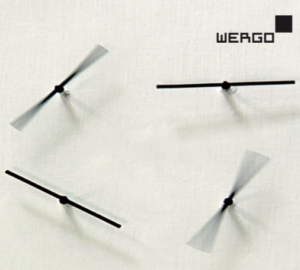 The Sounds of Shadows 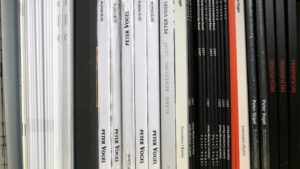