Bridge Markland performs in front of Rhythmic Sounds I,  Freiburg 1997

“Performances are mostly worked out in collaboration of myself with the dancers. First, all different possibilities of sounds are being played, at this stage improvisation is limited to the very musical structures. Preferences for certain sounds develop slowly, and only then a movement concept emerges from this.

From a certain stock of sound-movement-sequences a general conception is then worked out with regard to a certain dramaturgy, but in which all individual elements are improvised. Fixed choreographies make no sense, since only flexible interactions provide an essential aesthetic experience.

“The developments of Modern Dance produce the appropriate dancer: It requires a dancer who is free from all guidelines, who is calibrated to spontaneity and free improvisation, who is marked by his own consciousness of space and time, and who is competent in translating directly perceived acoustic stimuli into coordinated, aesthetic movements …” (Uwe Rüth – „Peter Vogels Klangwände als Handlungsformen“ from the catalogue “Peter Vogel – Interaktive Objekte, Eine Retrospektive” published by Skulpturenmuseum Glaskasten Marl, 1997) 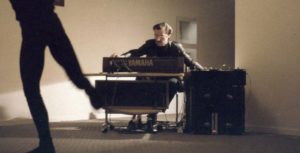